APP STORE SUMMARY
Important Notice:
Functionality is not guaranteed on devices that are updated to iOS 8.

The Street Fighter and Tekken franchises clash head-to-head in this never-before-dreamed-of crossover battle! Take on players from all over the world in Wi-Fi Ranked Match while increasing your player level!

※This application was created specifically for the iOS platform, and as such is different from the console version of Street Fighter X Tekken. It takes advantage of the "quick and easy fun for everyone" game idea that is unique to the iOS.
Enjoy the gorgeous and striking 3D graphics with retina-display compatibility. Whether you're a Street Fighter or a Tekken fan, or you're new to both franchises, this game is sure to appeal to you!

◆2 vs 2 Tag Battles
Choose between Street Fighter and Tekken characters and create your very own tag team. Working together with your partner will be the key to victory!
Utilizes Capcom's Visual Pad for simple to use controls.

◆Striking 3D Battles
Four characters will duke it out in 3D rendered spaces! We've really pushed the graphics to their limits! Makes full use of the retina display for crisp and clear graphics!

◆New System : Gem Roulette
The Gem Roulette system is unique to the iOS version. Hit your opponent with the Launcher Attack (-> + X) to spin the roulette and get a random power-up.
Power-up your Pandora's Boxes to make your roulette wheel a force to be reckoned with!

◆Take on Skilled Players in Wi-Fi Ranked Match
Fierce competition from all over the world awaits! If the global scene feels a bit daunting, try becoming the champion of your region first!

-----
◆Caution for Play
As this game continually sends data to the server, please play in an environment with good reception.

To add a Qi badge for STREET FIGHTER X TEKKEN MOBILE  to your site: 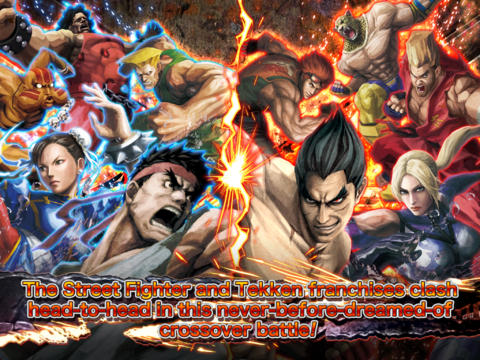