Command two crack companies of American soldiers and direct an intense campaign in the European Theater of Operations starting with the D-Day Invasion of Normandy.

Tailored to and optimised for iPad, Company of Heroes features an intuitive user interface for rapid execution of advanced real-time tactics in the heat of battle.

A MASTERPIECE BROUGHT TO MOBILE
One of real-time strategy’s most celebrated games redesigned for iPad.

FROM D-DAY TO THE FALAISE POCKET
Direct squads of US troops against the mighty German Wehrmacht through 15 gritty missions based on some of the most challenging fighting of World War II.

SHAPE THE BATTLEFIELD, WIN THE BATTLE
Destructible environments let you exploit the battlefield to your best advantage.

IMMERSIVE VISUALS
High-resolution graphics optimised for the Retina screen of the iPad.

BUY ONCE, COMMAND FOREVER
The classic desktop game, available as a premium app. Download missions and skirmish maps at no extra cost.

Important information regarding Company of Heroes:

• If you require assistance, please contact our support team at support@feralinteractive.com 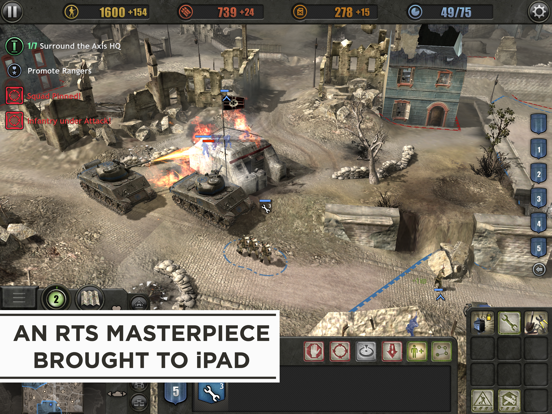